STOCK UP ON FANTASTIC WINES AT AN INCREDIBLE PRICE AND CONNECT WITH OTHER NAPA WINE LOVERS | THE MIRA SIP & SHARE PROGRAM
Home/Blog/Wine Notes/Featured/Harvest Recap:
Weight Tag Number One

Dawn comes quietly to the Napa Valley on the morning of the first harvest at the new Mira Winery. Fog that cooled the grapes overnight has lifted and the sky glows gold. The stillness in the vineyards belies the intense activity overnight as crews worked under lights, picking grapes at their ideal balance of sugar and acidity. Visitors who have come from all over the world to experience harvest are still asleep, except for the intrepid few who dangle silently below brightly colored hot air balloons in the morning sky. 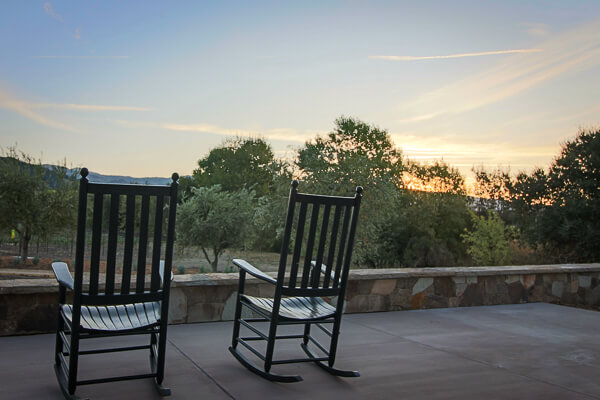 In a small office adjacent to the Mira winery, proprietor Jim “Bear” Dyke and winemaker Gustavo A. Gonzalez work quietly on laptops at opposite ends of a long harvest table, getting as much business out of the way as they can before the day’s real work begins.

Ten miles to the south a truck drives down the dirt lane between the low rolling hills of Hyde Vineyard, one of the most famed fruit sources in the Carneros AVA, then rumbles onto the Carneros Highway to begin its journey up valley. The truck will make several stops. At 192 acres the vineyard known as the “King of Carneros” provides grapes to an elite collection of the Napa Valley wineries. Among this morning’s load are several white bins bearing the Mira logo, bound for Yountville.

Meanwhile in the winery assistant winemaker Jesus Medina is in constant motion, prepping and arranging equipment. Gustavo moves between office and winery as he and Jesus check settings on the winery’s glistening stainless steel equipment. Even with a team that has worked more than fifty harvests combined around the globe, there is always something to learn, especially in a brand-new winery loaded with state-of-the-art tools. 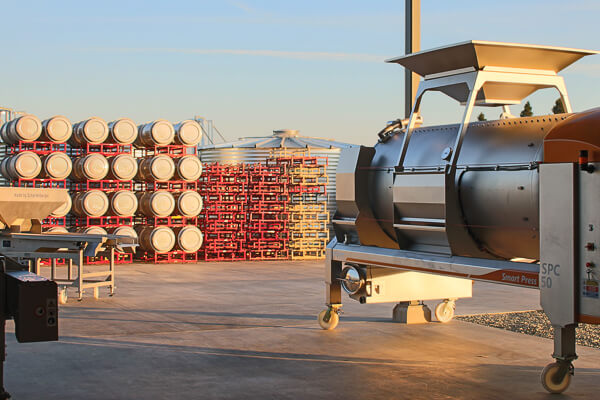 While the basic principles of winemaking have not changed over thousands of years, advances in technology and engineering impact every step of the process at a modern winery. The Mira Winery’s design and equipment are all geared towards a greater degree of precision, giving Gustavo and Jesus the ability to monitor and adjust the wine’s progress at every step along its journey.

The sun crests over the hills as everyone works on, but eyes wander regularly to the long driveway, keeping watch for the first fruit delivery ever to arrive at 6170 Washington Street. There is a sense of nostalgia infused into the excitement of the first day of harvest at the new winery. It has been ten years since the initial purchase of grapes to be made into wine under the Mira label but it feels like another beginning with the advent of the new winery. “The first grapes that got us started came from Hyde Vineyard,” says Gustavo, looking across the vineyards at the traffic on Highway 29, “so it’s pretty perfect that they’re the first ones to deliver grapes here.”

The truck arrives. Gustavo greets Chris Hyde, son of Hyde Vineyards founder Larry Hyde, as an old friend. Winemaking is an art that spans years and the relationships that enable that art possess their own lengthy timelines. Decades of collaboration fosters a genuine closeness between top winemakers like Gustavo and the Hyde family, and that is what powers the winemaking philosophy at Mira. 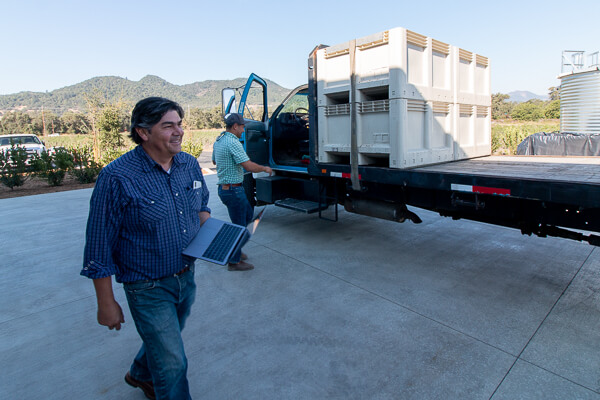 Yet there is uncertainty in the air. So many factors affect grape growing that despite any contracts in place between grower and winery, the actual tonnage arriving is not known until the fruit is weighed on the crush pad. The Mira bins, filled with Calera clone Pinot Noir that gives their upper edge a purple blush, sit on the back of the flatbed truck while Gustavo and Jesus immediately begin to speculate about their weight.

The grapes are taken off the truck by forklift and moved to a large scale linked into a digital system that has replaced the old paper tag system. Still, as Gustavo checks the weight of the first bin on his laptop and electronically records the official tonnage he smiles and says, “Weight tag number one.”

At the start of the harvest the winery is hungry for grapes and with good conditions throughout the season growers may have more to sell. Conversation turns to negotiation on the crush pad. There are references to discussions and loose agreements made over wine-filled lunches earlier in the year. In the end it is decided that a few more tons of a second Pinot Noir clone from Hyde Vineyard will arrive the next day. Both sides seem pleased. The Hyde family has allocated more fruit to a grower they trust and admire, while Gustavo has more of the grapes he loves. 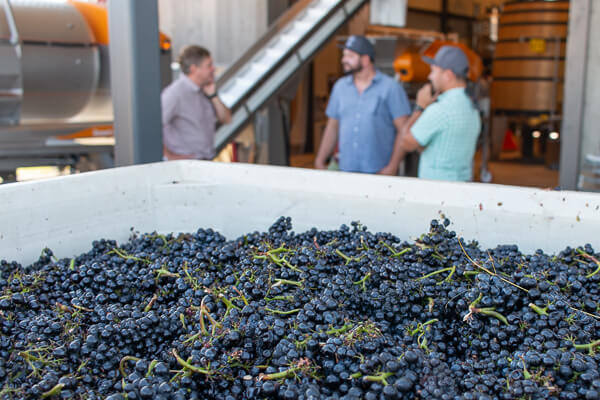 A group of volunteers has gathered outside the winery. Hospitality Director Kate Schwass is there along with wives of the winery team: Dawn Dyke, Erica Gonzalez, and Veronica Medina. Also present is Ollie, the Dyke’s Kooikerhondje, already sniffing the ground for any grapes that have escaped the bins. Everyone gathers by the Hyde Vineyard truck and bottles of vintage Dom Perignon Champagne – 2009, the year Mira first made wine – are opened for toasts to kick off the harvest and officially christen the new winery. 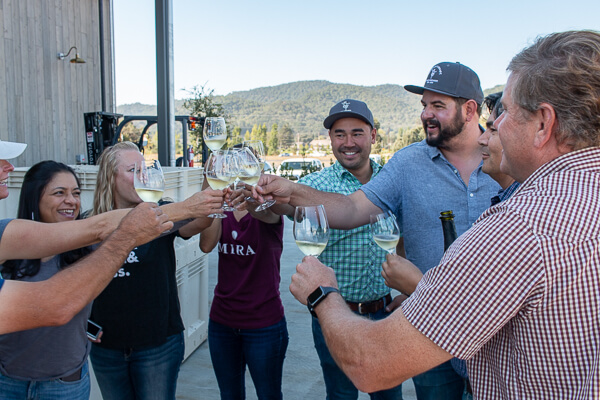 It is a moment of celebration and gratitude, bringing together many of the people who have been part of the Mira story from the beginning. Opening a Napa Valley winery is a massive undertaking, one that began nearly two years earlier and has, for months, dominated the lives of those assembled. In the morning calm it is possible to take a breath and look back with pride on the accomplishments that have led them here. But the pause is brief. The grapes have arrived and there is now much work to be done.

Fermentation is a simple process, one that occurs freely in nature with minimal encouragement, but controlled fermentation of the sort that produces world-class wines is a delicate undertaking. Control begins with the elimination of any unwanted influences, so for every hour spent processing the fruit there is another two to three hours of related cleaning along the way. Each piece of equipment involved in crush and fermentation must be individually prepared and fine-tuned before it is placed in the processing line and adjusted again to create a seamless workflow. 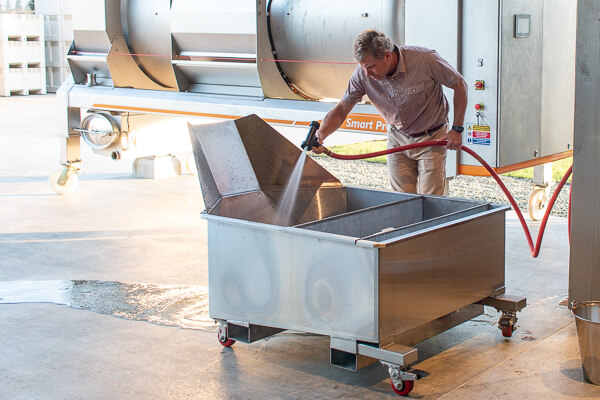 That processing line consists of four primary components and begins with the sorting table. Jesus uses the forklift to raise bins of grapes and tip them into a hopper that gradually delivers clusters onto the sorting table below. Bear stands on a ladder with rake in hand pulling the clusters forward from the bins. The mechanical sorting table has an adjustable angle and controls for shake and vibration that spreads the clusters and bounces them down the line. Below the hopper a pan collects juice freed by the pressure of the grapes on themselves during transit and any more released along the sorting table. The buckets it fills constitute the very first juice of the 2019 harvest.

The jolly volunteers, moods lightened by early morning champagne, stand along the line and remove any clusters that appear underdeveloped or damaged along with excessive leaves or other debris. Most of this work has been superseded by the vineyard managers who have carefully tended the vines throughout the season so that only the highest quality fruit in peak condition arrives at the winery. Still, the volunteers keep themselves busy inspecting the grapes as they bounce by and remove anything that does not belong, such as a three-inch praying mantis who is dubbed George and set on the adjacent press to oversee the work. Gustavo walks the line and admires the pristine clusters, already talking about the promise this harvest holds. 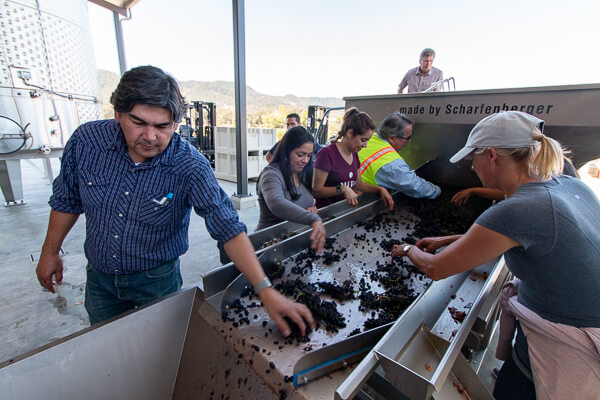 At the end of the sorting line clusters drop onto a special inclined conveyor belt and are caught along evenly spaced steps. It too is specially designed to capture any juice released as it lifts the clusters and delivers them to the next stop on their journey: the destemmer.

The sorting table relies on human effort, aided by technology, but the destemmer fully automates a task that would be challenging, or at least miserable, to do by hand. Clusters of grapes fall in and are gently removed from their stems by rows and rows of specially shaped rollers spread out over a large area. Each grape that is freed from its stem falls into a stainless-steel bin, along with any juices released in the destemming process, and perfectly cleaned plant material exits the back of the machine. The process appears simple but is powered by such complex technology that an engineer from the manufacturer is onsite to advise and assist with adjustments during this maiden voyage. 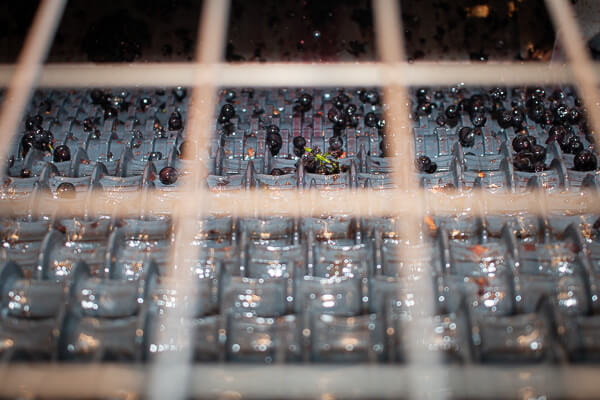 From here the bins filled with mountains of berries and the free-flowing juice produced along the way are moved across the winery floor and lifted high into the air so that they can be tipped into fermentation tanks. Bear stands on the gangplank and rakes out each bin as Jesus gingerly adjusts the tilt and angle of the bin to put gravity to work. Gustavo passes up buckets of dry ice which are added to the tank to lower the temperature and stave off any fermentation until the juice has had ample time to extract color and flavor from the grape skins.

The work feels focused, but the mood is relaxed. Equipment is stopped and adjusted as needed. At regular intervals laughter erupts along the sorting table and purple stains are starting to appear on skin and clothing alike. The perishable and ever-changing nature of wine grapes brings a certain level of urgency to the day. But as each cluster begins a journey that will last for years at the winery and decades in the cellar, there is always time to be certain everything is done right. 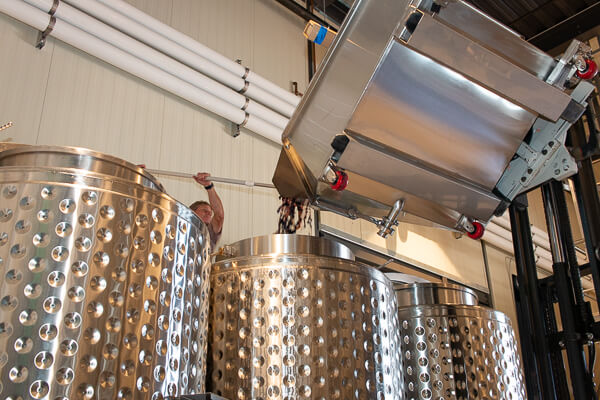 The Calera clone Pinot Noir from Hyde Vineyard that passes through the line today will spend a week or more in cold maceration – extracting flavor and pigment from the skins before fermentation begins – and then be allowed to slowly ferment over a two-week span. From there it will move to new French oak barrels in a variety of toasts from several cooperages to age and develop for another two years. Along the way Gustavo and Jesus will constantly taste the wine to evaluate its progress and make adjustments to time, temperature, barrels, and any other number of factors to help the wine achieve its fullest expression. The process is exacting but is also more art than science, as the Mira pure approach to winemaking dictates that the wines are not manipulated in any artificial manner with chemicals or additives. But that is all work that seems far on the horizon as the first day of crush stretches into the afternoon.

With this configuration the winery’s equipment could theoretically process up to ten tons per hour. Jesus estimates that today the pace was closer to one ton. Mira’s careful and precise approach to winemaking means that such a maximum rate would never be called for, but the winemaking team is confident that as they make adjustments are become more familiar with the equipment they can achieve something in the neighborhood of three tons per hour. “For next year?” Jesus is asked. He chuckles and offers a wry smile. “No,” he says, “by tomorrow.” 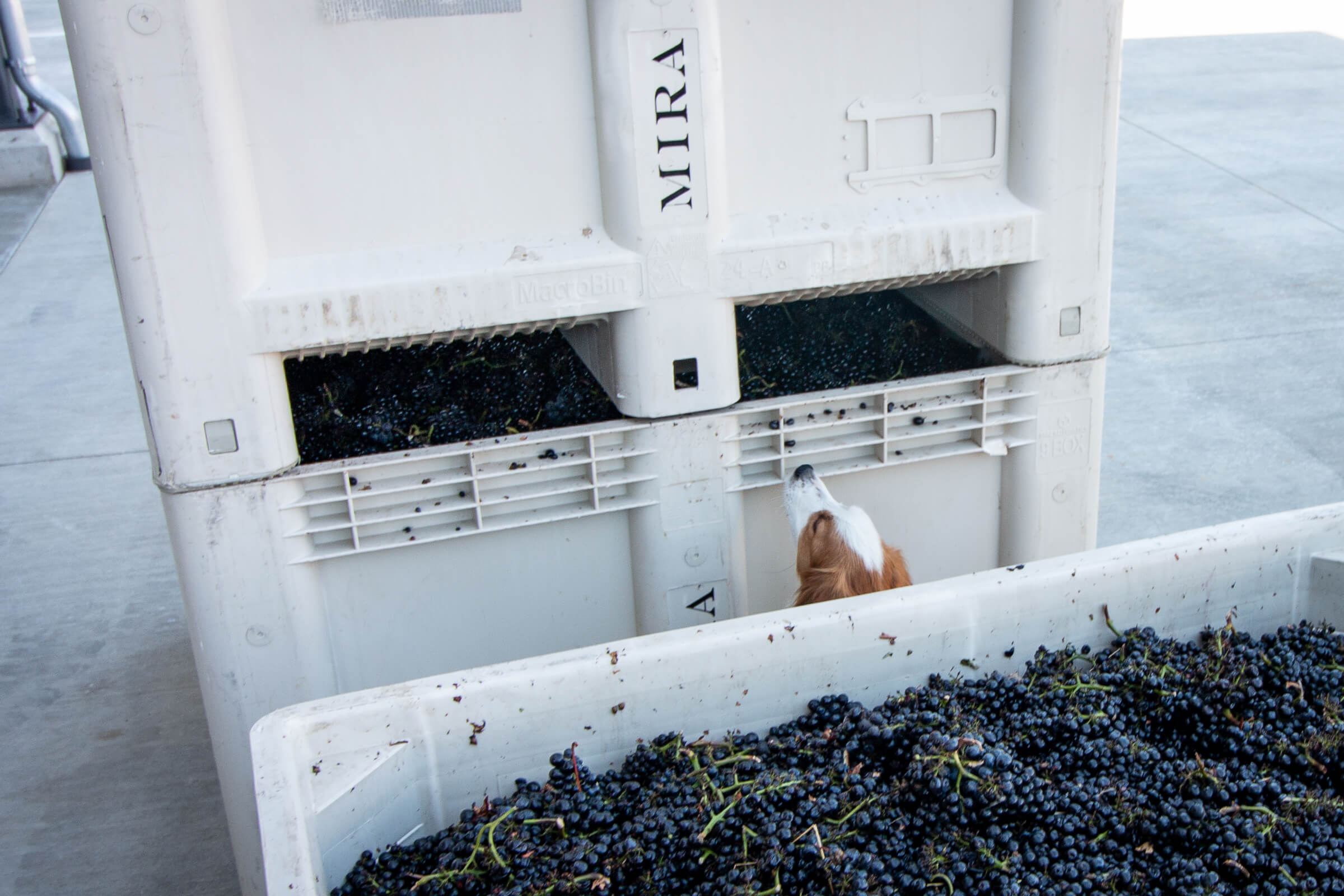 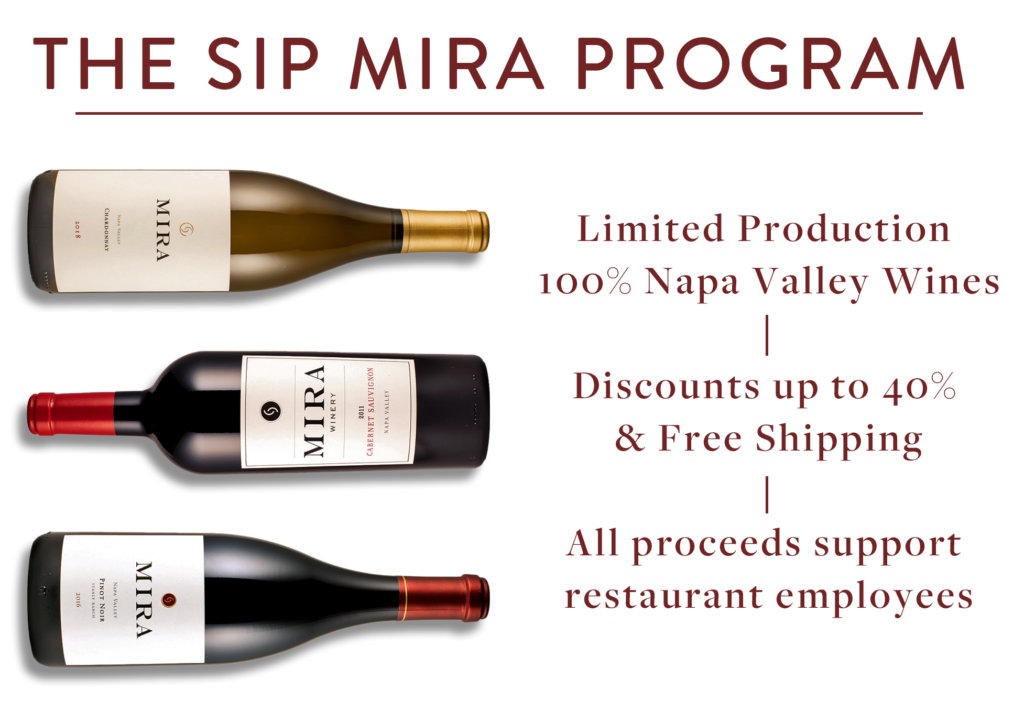 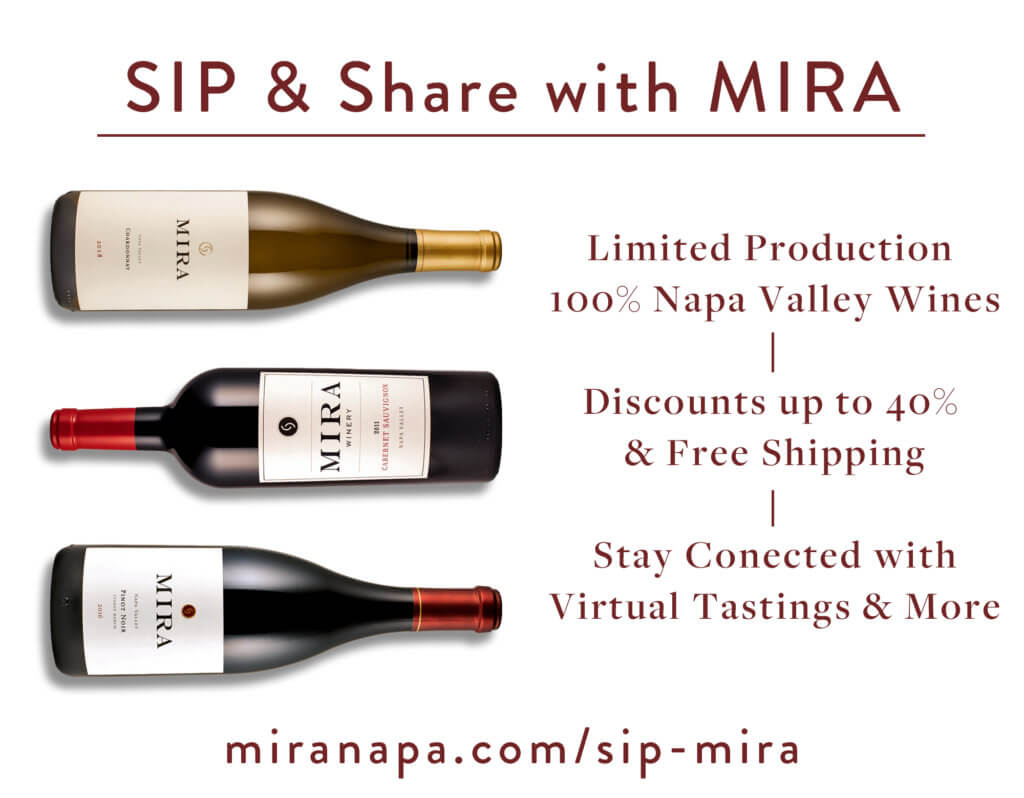