Mira Winery released its 2014 Merlot, winemaker Gustavo A. Gonzalez’s first Merlot since his 100-point 2001 Masseto 16 years ago. The bottles are available just in time for International Merlot Day, Nov. 7.

Dominated by dark fruit, chocolate and cedar flavors, Mira’s 2014 Merlot fruit is harvested from the esteemed Hyde Vineyard out of the Carneros AVA of the Napa Valley.

“There’s a unique part of the vineyard — this tiny little pocket — where the weather is just warm enough, and the cycle of the Merlot is just long enough, that we’re able to get really good ripeness in this Merlot,” said Gonzalez. “It’s a wine with a lot of brilliance, elegance, great color, aromas, and a lot of length.”

Though Mira is new to Merlot, Gonzalez is not. While working at Italy’s Tenuta dell-Ornellaia in Tuscany, Gustavo and winemaker Michel Rolland produced the 2001 Masseto, which promptly garnered a 100-point rating from Wine Spectator. The coveted bottle now trades for more than $1,200.

“The feedback has been incredible, and with only 200 cases available Gustavo has created another masterpiece that wine lovers and collectors alike won’t miss,” said Mira Proprietor Jim “Bear” Dyke. “And at $65 a bottle, it’s a value that won’t last long.”

Mira’s first Merlot is hitting the market as the varietal — particularly fine Merlot — enjoys a renaissance among wine lovers. Sales of “luxury” Merlot increased 5 percent in the past year, according to Bloomberg, in part because there is less sub-par Merlot available. As vintners have turned to other varieties, California acreage devoted to Merlot grapes is now about 27 percent below its peak. 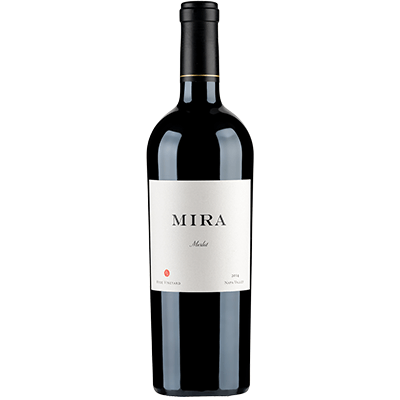 Dominated by dark fruit, chocolate and cedar flavors, Mira’s 2014 Merlot fruit is harvested from the esteemed Hyde Vineyard out of the Carneros AVA of the Napa Valley.